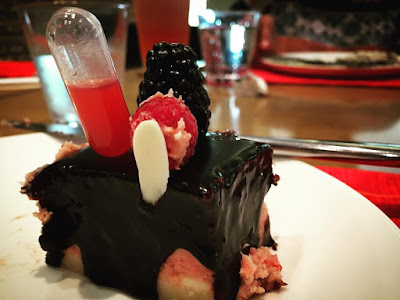 During the latest visit in the Heat (Shangri-la Plaza Hotel), I was able to try their featured dessert: Raspberry Molten Brownie Double Shot Vodka Cheesecake.

The name is a mouthful but I don't mind.  You really have to include all of them because it does contribute to how good it was.

I took just a small slice from the small squared cheesecake but it was more than good enough for me.  It was so rich and thick that I even have to slow down to taste every bit of it.

With the pipette, you can drizzle it over the cake, inject the fluid or squeeze them in your mouth.

Through the years, I've noticed that there are a fewer people eating in hotel buffets after the emergence of more affordable restaurants with their own smorgasbord.  But sometimes, it's okay to splurge on the better stuff.

Chew On This
Pasig, Philippines
Surprise Me!

This blog is a personal blog written and edited by me. For questions about this blog, please contact chewonthis2011@gmail.com.

This blog accepts forms of cash advertising, sponsorship, paid insertions or other forms of compensation.

The compensation received will never influence the content, topics or posts made in this blog. All advertising is in the form of advertisements generated by a third party ad network. Those advertisements will be identified as paid advertisements.

The owner(s) of this blog is not compensated to provide opinion on products, services, websites and various other topics. The views and opinions expressed on this blog are purely the blog owners. If we claim or appear to be experts on a certain topic or product or service area, we will only endorse products or services that we believe, based on our expertise, are worthy of such endorsement. Any product claim, statistic, quote or other representation about a product or service should be verified with the manufacturer or provider.